Welcome to our annual roundup as we head towards Chanukah and Christmas. Promoting the art of my late aunt over the past 15 years has been a labour of love with much excitement and many surprises. This year was no exception. And we have some great Chanukah and Christmas present ideas for you too.

For much of the year we were focused on the exhibition, Modern Scottish Women - Painters and Sculptors, 1885 to 1965. This ran at the Scottish National Gallery of Modern Art, Edinburgh, from 7 November 2015 until 26 June this year. The exhibition featured Hannah’s sculpture, 'Woman and Bird' (1955), which was beautifully displayed.

This exhibition, opened by Nicola Sturgeon, First Minister of Scotland, and the accompanying catalogue, were especially important because they revealed and celebrated the contribution made by Scottish female artists to this chapter of Scottish art history for the first time. We were delighted to contribute an in-depth article for the sumptuous catalogue. This is one of the most challenging writing jobs that we've tackled and it was well worth it because the catalogue sold out!

HANNAH THE ILLUSTRATOR
Hannah's drawings were also featured in a smaller exhibition within the Keiller Library at the Scottish National Gallery of Modern Art.  This focused on Scottish women illustrators and book designers and ran until March 2016.

EXHIBITION’S CURATOR REWARDED
We were thrilled when Alice Strang, curator of the whole Scottish National Gallery of Modern Art exhibition, was made a Saltire Society Outstanding Woman of Scotland for her work on the project which received extensive media coverage, including in UK national daily newspaper, The Telegraph and in The Scotsman. See these links for the reviews:
http://www.telegraph.co.uk/art/what-to-see/modern-scottish-women-scottish-national-gallery-review/
http://www.scotsman.com/lifestyle/culture/art/art-review-modern-scottish-women-edinburgh-1-3948351
Thank you to all Hannah’s fans who made it to the exhibition. 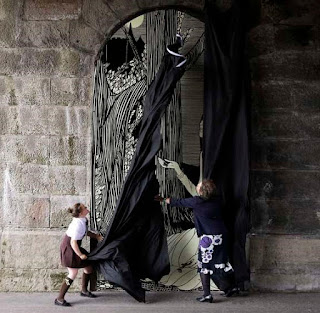 Another huge honour came on Friday 24 June with the unveiling of a magnificent project – a public art installation by WAVEparticle and the Gorbals Art Project and made by Liz Peden. This art, covering the wall of three massive arches under a railway bridge at Cleland Street, in the Gorbals, Glasgow, commemorates three people who were born in that district who had played important roles in the world. They were Allan Pinkerton, founder of Pinkerton's Detective Agency, Benny Lynch, world flyweight boxer, and Hannah Frank, artist and sculptor!

Alison Thewliss, MP for Central Glasgow, launched the event. I was privileged to unveil the Hannah Frank arch, aided by a schoolchild from St Francis primary school. David Barcelo from Glasgow City Council has done a terrific job reclaiming the site, turning it from a tip to a beautifully landscaped area full of art. The arches are illuminated after dark making this time of year a terrific one to view. We hope to work further with WAVEparticle and host a larger exhibition in the arches area in 2017.

SOUTHSIDE GALLERY
The Southside Gallery, Glasgow, is now selling Hannah Frank prints - signed and unsigned. There will be a Hannah Frank exhibition there too. We will keep you posted.
Find the gallery at 26-28 Battlefield Rd, Glasgow G42 9QH. Tel: 0141 649 8888. www.southsidegallery.co.uk

2CANVAS
We love seeing Hannah Frank works on canvas. Therefore, we were especially pleased that 2canvas held an exhibition this year, celebrating our collaboration which brings  large scale Hannah Frank reproductions, on canvas, of every one of the images. 2canvas, 155 Stockwell St, Glasgow G1 4LR.  Tel:  0141 552 0005. www.2canvasart.co.uk
The gallery is at 26 – 28 Battlefield Road, Glasgow, G42 9QH. Call 0141 649 888 and see www.southsidegallery.co.uk

HANNAH FRANK FOR MADAME ECOSSE
Hannah Frank's 'Out of the Night a Shadow Passed' (1928) forms the cover image of a new book due out in February 2017. Madame Ecosse by Marion McCready, an award-winning Scottish poet based in Argyll, will be published by Eyewear Publishing.

The poet has been a fan of Hannah’s for some years. She says: “Madame Ecosse is a very Scottish collection of lyrical, and at times political, poems ranging in theme from Mary, Queen of Scots to Trident, but always with a focus on the natural world. Female experience is expressed through mythical and historical characters and includes a sequence exploring the way childbirth has been viewed by the medical establishment over the last century.”
Marion won a Scottish Book Trust New Writers Award in 2013 and won the Melita Hume Poetry Prize (2013). Her poems have been published in Poetry, Edinburgh Review and The Glasgow Herald as well as in Be the First to like This: New Scottish Poetry (Vagabond Voices, 2014). 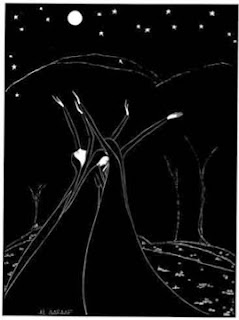 We think that for this time of year the print ‘Moon Ballet’ makes a wonderful seasonal gift. A signed lithographic print is available for £200.


Other signed prints are available from between £100 and £400.
A full range of digitally reproduced unsigned prints make excellent, distinctive gifts. The ones that were produced before my aunt died are £25; we can also have prints made to order of any other of my aunt’s prints, for £75, or on canvas or blockmount (see website for prices). We still have some of the notelets available, for £5.99 for six different designs.   The beautiful black book ‘Hannah Frank, A Glasgow Artist, Drawings and Sculpture’ is also available, reduced to £10.50. All from the webshop on www.hannahfrank.org.uk

Sculptures are available at between £1500 and £3000 – there’s been quite a lot of interest in recasts of sculptures this year, I wouldn’t be without mine….

Ordering is easy and don’t forget all funds go back into the project to bring Hannah’s name and work to a wider audience, covering the costs of the website, keeping the works safe in Glasgow, setting up new exhibitions etc.

Fiona Frank (niece of the late Hannah Frank, and curator of the ‘Hannah Frank Art’ project).

Many thanks for wordsmithing to the indefatigable Judith Coyle,
Posted by Fiona at 12:33 am