HANNAH FRANK NEWS JUNE 2013
Some up to the minute news and actions for you to do THIS WEEK!
First – please vote for award winning filmmaker and 'Friend of Hannah Frank', Sarah Thomas, soon - before THIS MONDAY  24th June (tomorrow) at MIDNIGHT.
SARAH THOMAS SHORTLISTED FOR PRESTIGIOUS PENGUIN BOOK PRIZE
**Deadline for voting is midnight on Monday 24 June!
Sarah Thomas, an anthropological filmmaker with connections to Lancaster, Manchester, Iceland and Kenya, and who made the beautiful film ‘Hannah Frank: The Spark Divine’ for us in 2008, has been shortlisted for the Penguin Books Wayfarer Competition.  This is Sarah’s dream summer where she would travel the old ways and hedgerows of Britain during July and August, blogging about it and making videos along the way. The competition is inspired by Robert Macfarlane's new book, The Old Ways, which explores our relationship with the land through the paths we trace.
Sarah made a two minute video which you can see on the bottom row of the competition website.  Robert Macfarlane himself was on the judging panel and selected Sarah’s entry for the shortlist of 20.  When you've seen the video - on http://www.ajourneyonfoot.com/   please vote for it. Robert McFarlane will choose from the top ten films chosen by the public.  So please vote, tweet, facebook, and otherwise help Sarah’s campaign to continue to make beautiful films about things she cares about.  And see below for a chance to see Sarah’s film ‘The Spark Divine’ in Dalbeattie over the next few weeks.

AUCTION AT MCTEAR’S THIS THURSDAY 27 JUNE
An opportunity to acquire Hannah Frank’s 1928 original drawing ‘There Once Was a King’s Son – The Garden of Paradise’ has arisen. This is an original pen and ink drawing, signed by the artist and dated 1928. The estimate is £1500-£2500. 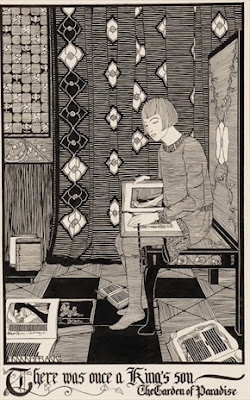 The drawing is being auctioned as part of McTear’s Scottish Pictures Auction on Thursday 27 June in Glasgow. It is lot 1731. Size: 40cm x 25cm.
Viewing:
Monday 24 June 10am-5pm
Tuesday 25 June 9am-5pm
Wednesday 26 June 9am-5pm
Thursday 27 June 9am -start of sale, 6pm
If you can’t make it to the auction you can bid live online – or just watch the bidding process online till you get carried away and make your bid!
McTear’s, Meiklewood Gate, 31 Meiklewood Road, Glasgow, G51 4EU. Tel: 0141 810 2880. Email: Natasha Raskin  or Ceara Hughes
Find out more here

WALK AND EXHIBITION VISIT
The opening of the Hannah Frank and Daniel Fuller exhibition at the Nail Factory, Dalbeattie, Dumfries and Galloway, attracted lots of visitors. 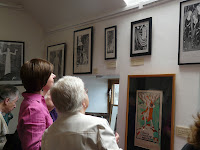 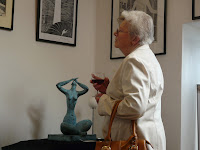 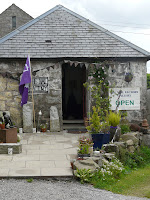 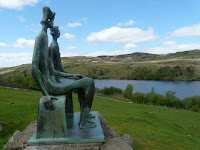 Before the opening of the Dalbeattie show, Mary Smith put us in touch with her friend Charlotte, who told us:
“In the early 70s, I was in Glasgow with my Ma; it was summer but I can't remember if it was just a visit or whether she had come up with me to prepare for the new term. I can't remember exactly which city centre square we were in but we noticed that Charles Frank [Hannah Frank’s father] had a retiral sale; his shop sold telescopes and all sorts of optical stuff. My Ma thought it would be interesting to have a rummage around and told me his sister, Hannah, was well known as an artist. From the way she spoke about her, I now wonder if she'd known her; they were the same age and must have been at Glasgow University at the same time. 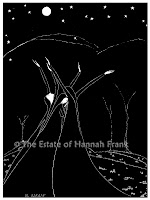 The shop was almost empty but as well as optical things, there were various arty things still for sale. I remember a lovely, modernist chess set. Nearby, on the floor was  a tatty box containing prints by Hannah Frank; not many were left. I scrambled around on the floor to have a good rummle through them. Having selected one, I noticed another which had been signed by Hannah herself, albeit in pencil. So, I bought that one too.
My Ma suggested I kept them in my bottom drawer and, when we got married, these two prints were the first things I had framed and put on the wall. Then, I had them framed in a shop in Kirkcudbright. Recently, I had them reframed in Jessie's shop down in Wigtown. Apart from one being signed, both have that Aarif logo and I've always wondered what that meant".  The two drawings Charlotte bought were Moon Ballet and Wrap Thy Form in a Mantle Grey. 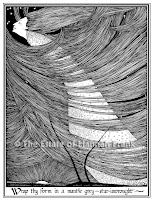 Do you have a story about your Hannah Frank prints?  Did you meet my aunt? Tell us your stories and I’ll write about them in future blogs.

Or send us a picture of your Hannah Frank drawing, print our sculpture and how fantastic it looks in your house and I’ll publish it on the blog and 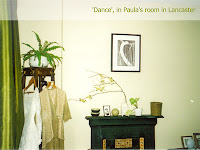