Hannah Frank News May 2013 - Dalbeattie, Lerwick, dancing about the art, books, 2 for 1 prints and lots more

THE NAIL FACTORY – NEW EXHIBITION
An exhibition of Hannah's work will run from 2 - 30 June 2013 at The Nail Factory, Dalbeattie.
This refurbished Victorian workshop is at the heart of Dumfries and Galloway and is a multi-use
interactive art space. A selection of Hannah Frank’s prints and two original drawings will be on show in the stone building alongside 10 of her bronze sculptures - and there will be an opportunity to buy prints, cards and books. .

Rupinder Dulay, Curator at The Nail Factory, said: “We are proud to host a retrospective exhibition by Hannah Frank, organised by her niece, Fiona Frank, who has been instrumental in bringing
her aunt's work to life. The Nail Factory was a factory making cast iron nails 200 years ago, run by women, and Hannah Frank’s works will be exhibited next to those of Daniel Fuller, a Native American artist who rediscovered his roots and culture to inspire many young artists in their struggle to accept their heritage.”

The celebratory launch event with a wine reception and kosher buffet will take place on Sunday 2 June at 1pm. Hannah Frank was one of the first Jewish students to study at the Glasgow School of Art, and the buffet will be sponsored by the Scottish Council of Jewish Communities, in honour of the first showing of this Scottish Jewish artist’s work in Dumfriesshire, as part of its work to celebrate Jewish culture in Scotland.

Also at the launch there will be a screening of the film ‘Hannah Frank, The Spark Divine’, by award-winning filmmaker Sarah Thomas, which explores the life of the artist as a young woman through her diaries and her poetry as well as her art, and includes interviews filmed with Hannah when she was in her late 90s.


FURTHER INTO THE DIGITAL AGE

This is the first of my newsletters for several years that I'm publishing directly as a blog - I had meant to do this years ago but it didn't happen and so far I have mostly just sent them out as emails - very shortsighted!   It makes lots of sense to put this info out on a blog so everyone who reads it can send a link directly to your contacts and networks, and so it will come up in searches. It's one of the ideas of my zappy new temporary Digital Media Assistant the fabulous
Elly Griffiths-Ward.

Elly has put together a series of  Pinterest thematic exhibitions for my aunt which we hope will get lots of interest and may help to trace some 'missing' originals.  Have a look - they're wonderful!  We will share curation of the online exhibitions with other Pinterest members and we hope to collect varied and inspiring collections of images from lots of artists exploring different interpretations of similar themes. So visit the boards, and if you are so inclined you can start adding your favourite art to the pages. Also if you have any other ideas for collaborative boards do let us know. This project is really open and we are excited to see where it will go!

We are also planning to tweet a 'picture of the week' and put drawings on Facebook as well to get a conversation going.  (If you haven't 'liked' the Hannah Frank facebook page  yet please do so if you're a Facebook person, a nice conversation this week followed the posting of 'Night' on the Facebook page - and follow me,  @northernfiona on twitter... .) 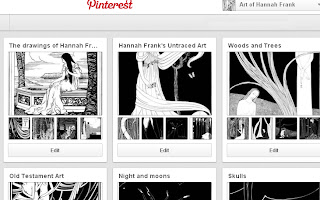 The Hannah Frank exhibition at The Shetland Museum and Archives, Lerwick, ended on Monday 4 March. It was a great success. The show began just four days after Up Helly Aa, (as featured in the recent BBC drama ‘Shetland’) and I brought a little party of 8 people over from England, Scotland, and Iceland (!) to experience Shetland's amazing fire festival and stay on for the exhibition opening.  Filmmaker Sarah Thomas who now lives in Iceland gave a talk at the opening reception, and showed her film ‘Hannah Frank - The Spark Divine’.  I gave a personal tour of the exhibition, which included self-portraits of the artist as well as her trademark black and white drawings and her later bronze sculptures.

I went back to Shetland in April to collect the art works - no excuse needed to drop back to this beautiful place, with ever-changing light, lovely people and places, and LOTS OF WIND AND RAIN to keep you on your toes.

LADIES OF ILLUMINATED LETTERS
Glasgow Women's Library (GWL) launched its illuminated letter project on 8 March, International Women’s Day. The Library invited women to write an illuminated letter to a heroine of their choice. We were delighted when Fiona Doubleday, who lives on the Isle of Arran, contacted us to say that she has chosen Hannah Frank as her heroine.
She wrote on her blog about  her illuminated letter artwork: “It’s a mixed media piece that attempts to celebrate two aspects of Hannah Frank’s work – flow and stillness. As a former dancer and choreographer I see flow and stillness in all she created. Stillness in dance acts as a pause and, used properly, can be a highlight. Hannah's work reminds me that life is full of beautiful pauses. But it is flow that dominates her work. Using pastels as the primary media I have taken sections from her drawings and recreated them as small studies. I have added colour but kept the pallet limited in tribute to her simplicity. I then added small details such as Liberty fabric, which is dominated by flowing lines, and wax resistant watercolour organic shapes. The next step will be to create the letter before putting the finishing touches to the whole piece.”
Fiona Doubleday’s blog is here and is well worth following.

The Glasgow Women’s Library will be exhibiting the letters in due course – we will keep you posted.

DANCE PIECE INSPIRED BY HANNAH’S ART
Fiona Doubleday isn't stopping at an illuminated letter: she is now writing a dance piece inspired by Hannah’s work!
She is looking for six women, preferably ones who have never danced before. The piece will be created over around three days in the autumn on the Isle of Arran - and there may be some accommodation available too.  Fiona is also seeking someone to write the score – a soundscape with melodic moments. And she also wants someone to film both the rehearsals and the performance and edit this to form part of the body of work around Hannah Frank. The locations for the dance piece will be Brodick Castle’s nature garden, set against the backdrop of Goatfell Mountain, and also a moonlit beach. Contact me if you're interested and I'll pass on your details to Fiona.

BOOKS SIGNED BY HANNAH FRANK OFFERED FOR SALE
Most of you will know that my aunt was a great lover of literature: her books were like members of
the family. We now have a number of her own signed books which we are offering for sale to give you a chance to own something that Hannah Frank owned and loved as a young woman.  We'll give half the proceeds to Glasgow Women's Library.  The books are: 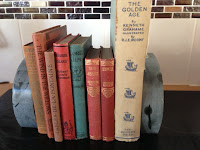 Then there are two books signed ‘Hannah and Lionel Levy’ or ‘ex libris Levy’. They are:
Kenneth Grahame - The Golden Age;
John Ruskin - The Seven Lamps of Architecture;
And lastly there is one book signed ‘Hannah Frank May 1932’ with her own bookplate: :
Kenneth Grahame - The Wind in the Willows (37th edition). (that one is now sold)
Price: £10 each plus £3.00 p and p. (£5.00 p and p for The Golden Age).  Let me know if you'd like any of these - first come first served - and I'll let you know where to send a cheque or bank transfer.

Three Hannah Frank images (including Woman with Bird 1955, left) will be used in Glasgow Women's Library's Women Make History map and guide to the Garnethill area. The map will be distributed free to promote the heritage and history of Glasgow. The project is funded by Glasgow City Council.   The project has previously produced similar Glasgow heritage maps for the East End, the Necropolis, the West End and the Merchant City. (And there's still time to go on the next Women Make History walk, to the Necropolis, on Sunday 19th May at 1 p.m. - you can see the map here and find out how to book here .)

NEW BOOK CELEBRATING HANNAH FRANK'S LIFE
In 2008 a conference took place at the University of Glasgow, 'Art Religion Identity', organised by Julie Clague from the University's Department of Theology in honour of Hannah Frank's 100th birthday.  Some lectures took place at the University Chapel surrounded by Hannah Frank's 100th Birthday Art Exhibition, and in the evening of the first day of the conference coaches took delegates to the Scottish Parliament in Edinburgh for a reception in honour of Hannah Frank herself.  Now, a book edited by Shulamit Reinharz and Julie Clague, a collection of the conference papers, is about to come out (Reinharz, Shulamit T and Julie Clague, ed. Art, Religion and Identity. Indiana University Press, 2013.) and you can read Shulamit's chapter online here  - an examination of ten Jewish women artists, one for each of the decades of Hannah Frank's life.

I've been writing newsletters about my aunt since 2003 and every time I sit down to write a newsletter I realise that there are three or four new things to report in the world of Hannah Frank, someone else contacts me, or another hundred schoolchildren in the USA draw Hannah Frank themed drawings....  Penny Richards, who regular readers will remember attended the poetry prize-giving in Glasgow back in 2010 and then designed a lesson plan about Hannah's art which is now being delivered to thousands of children across California, writes:
"Just back from the opening reception for the student art show at the Palos Verdes Art Center. There are many, many Hannah Frank-inspired pieces by young children on display! I took some photos for you. The show is up till May 26, if any fans are in the LA area and want to see more."

PRINTS OFFER
In celebration of this new digital age - and also the forthcoming Dalbeattie exhibition, we'll be selling signed and unsigned prints throughout May and June as 'buy one get one free' (with the cheapest free, of course).  Please have a look at the website www.hannahfrank.org.uk and the gallery pages to see prices etc.  (nb the ones with the asterisks are signed!)  When ordering, just pay for one print through the site and put a note in the 'notes' or email me (fionafrank@gmail.com) saying which second print you'd like.

Great to see the newsletter up as a blog post, complete with pictures. Really like the pics of the books grouped together.